Skip to primary content
Mother’s Day without your mom isn’t good. Everybody had a mom at one time. Way less than half the world’s population IS a mother, but everyone HAS a mother. So no matter what, the day is there for you, one way or another.
My mom died on February 9, 2006. She’d been diagnosed with cancer on Christmas Day, following surgery that day to find it. Once she knew there was a possibility it be might there, she wanted it out, now. Spending Christmas eve/day at a hospital out of town was small potatoes compared to getting this show on the road.
A few weeks after the surgery, which confirmed to us that she had ovarian cancer, she started chemo. Three days after the second treatment, her kidneys failed. Three days after that, she was gone. She was 79.
Her life was filled with laughter and sadness. She tried vainly to run the sadness off with laughter. She was born a twin, and fiercely loved her brother Bob. They were an infamous team, both fast runners and scrappy athletes who loved winning.
She had an older sister named Janice, who died from a heart condition at age 23. She adored Janice, her opposite with her quiet femininity. I wish I’d known her. Her rings and shoes fit me perfectly. I have her wedding china.

The twins. No question which one is more alert and curious–Betty, on the left. She’s already glaring at her mother, I just know it. 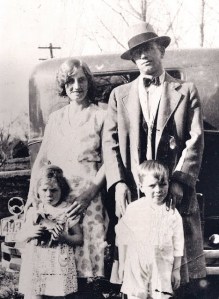 The twins, looking like part of Al Capone’s gang. My mama is not at all pleased with what’s going on here. She was never afraid to show that, trust me.

I can’t stop looking at this picture and wondering what happened to all these people. What a crew! This was in a tiny Iowa town, which my mom and her brother completely took by storm. She’s the one on the right end, second row. He’s next to her. Not sure if he’s toying with the lad in front of him, or doing the ear-pulling out of meanness. Somehow I get the feeling mom told him to do it.

Marching band was a huge thing in her life. This is a photo from high school. She went on to be the drum majorette of the Drake University marching band, and was eternally proud of it.

Ok, so this guy could have been my dad! He was her boyfriend in high school and college. I still have memorabilia with his name on it: a bracelet, a ring, cards, even mittens. I don’t know why they didn’t get married, it was one of those things I never thought to ask about.

Photo from college years, right around the time her sister died. I know this was a deep sadness her family, especially her mother, never could move beyond.

Second from left, life of the party. She never stopped being the life of any party until the day she died. Wish I was kidding. I inherited this trait, and spent many years honing it to perfection.

My dad is on the right. He was the youngest in a family of powerful Irish New Haven athletes, an All-American baseball player at Notre Dame. She met him when she was the hostess at a classic hotel called the Lakeshore, in Clear Lake, Iowa.
At her funeral, one of her best friends told me a story I love. My dad had been working for a Hamm’s beer distributor for awhile, also being catcher/manager for a local semi-pro baseball team the beer distributor sponsored. He was a ringer, in other words. They made him into a salesman.
He was the new guy, the tall, dark, handsome stranger. His fellow salesmen and their wives were very excited one night to hear that he was bringing a date to a bash at the lakeside ballroom where they all hung out and drank Hamm’s like fiends.
Her friend told me, in these exact words: “He walked in with this tan girl with a beautiful dress and a huge smile and great laugh. She sat him down and danced all night with everyone else’s husband or boyfriend. And it was OK with all of us! She was like that. By the end of the night, all the men loved her, but the women loved her more. I’ve never met any other broad like that.”
I cherish this story. I’m not sure I know any woman I could describe that way. Seriously.

Well, it worked on him, too. They were married in 1953. Days after that, my dad’s Irish immigrant father died back in New Haven. A few years later, one of his three brothers died too, leaving a young wife and several sons. This truly broke my dad’s heart. My brother’s middle name was Edward, after him. 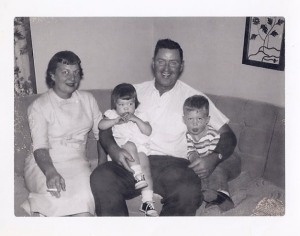 So, we’ve gone full circle here, to the twin daughter all grown up, still glaring at her mother, who must’ve taken this picture. Glaring at your mother is a big thing in our family. We’re all champions at it.
A few years after this picture was taken, more sadness descended. My mom’s dad, whom she worshipped, died of a heart attack at age 61. She was devastated. I remember details of this vividly. I don’t think her heart ever healed.
When my adorable brother was 22, he passed away from cancer. That was really more than this beautiful couple could endure –neither of them had the tools to deal with the staggering loss. Seriously, who does?
We all muddled through. Both of them are gone now, my dad going first in 2003 after a ten year battle with Alzheimer’s. I’m not kidding, she had that happen to her too.
So, Happy Mother’s Day to my beautiful, fierce, funny, sad, smart and tough-as-nails mama.