Skip to primary content
My dad was Irish, through and through. His parents both immigrated from Ireland and settled in New Haven. He was a unique character. He was funny, athletic, handsome, smart, and really sweet. He died in 2003. Here’s a story about him from the local paper.
By DOUGLAS BURNS
Times Herald Staff Writer
Tom Sheehan, a player-manager for the only professional sports
enterprise in the history of Carroll, the baseball Merchants of the
early 1950s, is one of those rare people who seemingly enjoyed
universal respect, friends and associates say.

“The essence of Tom Sheehan was that he liked people and people liked
Tom,” said James B. Wilson, publisher of the Daily Times Herald and a
close Sheehan friend.

After a long bout with Alzheimer’s Disease, Sheehan, 80, passed away
in the early morning hours of The Fourth of July, a fitting departure
date for this product of the Greatest Generation, a man who served in
World War II, came back and played baseball both at the college level
and professionally and then, as a salesman, helped build Farner-Bocken into a
regional distribution powerhouse.

Mr. Sheehan was born on August 13, 1922, at New Haven, Conn., the son
of Thomas and Bridget (Cull) Sheehan, Sr.
An Irishman with more than a little touch of superstition, he always
told people his birthday was Aug. 12 because he never wanted to mark a
year’s passing on a dreaded Friday the 13th.
He graduated from Hillhouse High School in New Haven with a scrapbook
of newspaper clippings attesting to his athletic achievements and then
attended the University of Notre Dame in South Bend, Ind.
He entered the U.S. Navy in 1943 and served during World War II in the
Asiatic-Pacific Theater. He was honorably discharged in 1946 and
returned to Notre Dame and graduated in 1947. 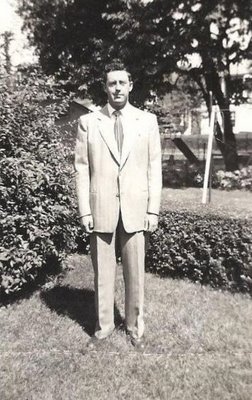 Tom, Notre Dame graduation 1947
At Notre Dame he was an All-American Baseball Player and team captain,
as well as a member of the basketball team.
“Tom was really a hero at Notre Dame,” said Fred Dolezal, a Carroll
insurance man who also graduated from that prestigious university.
“That was in an era when the boys were coming back from the Second
World War. That was a golden era for Notre Dame sports.”
In fact, Notre Dame baseball mentor Jake Kline said in the early 1940s
that Sheehan was the best college catcher in the nation.
“Three major league clubs want him but they won’t touch him until
after the war,” Kline told an East Coast reporter. “The boy’s not only
a great catcher but a good hitter. He hit a homer against Great Lakes
in the spring and I’m sure he’ll make the grade if he ever goes into professional ball.”

Tom and Jake Kline, Notre Dame c. 1947
Tom Sheehan did in fact sign with the Pittsburgh Pirates before being
lured, remarkably, considering today’s Major League Baseball salaries,
by more money in Carroll.
Dolezal, who spoke earlier this week at a prayer service, says
Sheehan’s name is featured prominently at Notre Dame landmarks.
While in South Bend, Sheehan developed lasting friendships with some
Fighting Irish legends. He roomed with Johnny Lujack, the Heisman
Trophy-winning running back who went on to play for George Halas’
Chicago Bears.
Now living in Arizona, Lujack called the Sheehan family this week to
offer condolences on the death of his college chum.
“A lot of Tom’s stories had to do with Notre Dame,” said Dolezal,
whose own son, Tim, a Kuemper Catholic High School graduate, was Notre
Dame’s valedictorian. “I know some of you got tired of the Notre Dame
stories but obviously I didn’t. I enjoyed them all.”

In 1950, Sheehan was hired to be the catcher/manager of the Carroll
Merchants semi-pro baseball team.
Carroll played in the Iowa State League, a circuit that enjoyed
success in the early 1950s before television dominated leisure time.
And in this league Sheehan was the star.
Former Carroll Daily Times Herald sports editor Howard Brantz wrote in
a column that fans from area teams went after Sheehan in much the same
way they now taunt Major League players who bat .359 — as Sheehan did
in 1950 for the Merchants when the team won the league pennant.
“The Carroll manager is our candidate for the best drawing card in the
league,” Brantz wrote. “You ought to hear the fans in opponents’
parks. It sounds more like they come out to ride Sheehan than see the
game. That’s no alibi for Sheehan or the Merchants. In fact, Tom
laughs about the fans getting on him.”
Sheehan told Brantz, “When the fans are on me they give the umpire and
other players a rest.”
It is that sort of self-deprecating remark that friends say revealed
much about Sheehan’s character.
“As many of you know from his obituary Tom had a remarkable athletic
career before he arrived in Carroll as manager of the Carroll
Merchants baseball team,” Wilson said. “But he never seemed to crave
attention because of his exploits nor boast of his accomplishments at
Notre Dame or later. He could tell stories for hours about his days in
athletics, but they were almost always about others, not about
himself.”
Very simply, Sheehan was a modest man.
Wilson recalled taking a plane into Chicago a number of years ago and
boarding a bus for downtown. Wilson found himself across the aisle
from George Connor, the legendary Notre Dame all-American tackle,
Chicago Bear and member of the National Football League Hall of Fame.
“He was returning to Chicago from New Jersey where he had done color
commentary for the Notre Dame-Rutgers football game the day before,”
Wilson said. “We started visiting and when I said I was from Carroll,
Iowa, he immediately asked me if I knew Tom Sheehan. Connor related
several stories about Tom at Notre Dame and I filled him in on his
life in Carroll, both enjoying hearing the other talk about our friend
Tom.”
Wilson said he and Connor could have sat in those two seats telling
Sheehan stories all day.
“As we left the bus Connor’s final comment was, ‘Tom was a really good
guy and a darned good athlete to boot,’” Wilson said.
For Sheehan, sports proved to be an arena for forming life-long
friendships.
It’s also how a 50-year marriage started.
Sheehan’s wife, Betty, a Nevada native and the long-time former
Carroll County Recorder, met Tom while she was working as a clerk for
the City of Ames.
“I went to a baseball game at Clear Lake, and this ballplayer saw me and said,
‘Hey! Who’s that good-looking chick over there? I’ve got to meet her,”
Betty recalled with her usual dry wit, in a 1992 interview with Times Herald reporter
Butch Heman after her retirement from the Courthouse.
Tom was married to Betty on Oct.10, 1953, at Nevada.
The couple then made their home in Carroll and Mr. Sheehan was a
salesman for the Farner-Bocken Co., from that date until his
retirement on Jan. 1, 1992.
During those years, Sheehan, the father of two children, Dan and
Kitty, was a frequent contender in local golf tournaments, and was
always a supporter of local youth sports.
Dolezal recalled asking Sheehan for advice before church at St.
Lawrence one day. Dolezal wanted to know how to work with a Little
League catcher who couldn’t pull balls from the dirt.
Sheehan — always the catcher at heart — said he would help, and
clearly spent some or all of the Mass thinking about the problem. He
found Dolezal after church and said, “Instead of getting on that
catcher, you should teach that pitcher not to throw the ball in the
dirt.”
Dolezal, Wilson and others say Sheehan was a rarity, a star athlete
and raconteur also known for his humility.
Former Daily Times Herald Sports Editor Dennis O’Grady, a
living archive of local athletics, said this week that Sheehan was one
of the more impressive sports figures and people in the rich history
of Carroll athletics.
“He was born and raised in New Haven, Connecticut, goes to Notre Dame,
and ends up in Carroll, Iowa, by way of semi-pro baseball and then
decides to stay here,” O’Grady said. “That’s sort of neat. Obviously,

he fell in love with Carroll, and vice-versa.”

I miss him a lot this time of year, when everybody wants to be Irish.
I don’t remember him ever being mad at me, even when I deserved it.
The only time he was ever stern with me was when I wanted to quit college. He listened to me wailing on the phone, and said, “well, ok, get back to work now.”
So I did.
Some things the newspaper story doesn’t tell you:
He used to make up stories full of characters with nonsensical, double talk names.
He loved it when we jumped into his bed on Sunday mornings and he’d read the paper to us and tell us stories and play with us.
He taught me how to play golf.
He knew tons of poems by heart and taught them to me.
His favorite was “Sea Fever” by John Masefield.
He loved music, and played it all the time when he was driving.
He sang along with the Carpenters and Barbara Streisand but usually sang the wrong words. He didn’t care though.
He bought me 45 rpm records every week, but I think it was so he could listen to them.
He loved “Georgie Girl.” I think that was the first record he bought me.
He also loved “Downtown” and “Band of Gold.”
He used to stand in the doorway of my bedroom when I was in high school, and he’d listen to my music. Sometimes, as in the case of Bob Dylan, he’d say, “Who told that guy he could sing?”
He gave everyone nicknames, and they had them for life.
He loved his cats, Lenny and Gracie. He kept a brush by his chair so he could brush them whenever they’d let him. He talked to them all day.
He talked about his brothers a lot. He had two, also accomplished athletes.
And he talked about the war.
His only son, my brother Dan, died at age 22. He never got over that.
Just thought i’d tell you about him as St. Pat’s day rolls around.
My best bit of Irish luck was to have him as my dad.