My dad, Tom Sheehan, died on July 4, 2003. It’s his birthday today. He’d be 90.  I’m trying to get a picture of that in my mind.
I imagine he’d be tiny and frail, and though I miss him fiercely, I’m oddly happy he’s not here. He’d have hated being diminished. He was one of those bigger than life guys, and I’m glad he gets to stay mostly that way in memory.
As each year goes by, I see him in a different light. Time allows us to see the big picture of a life when it ends. In a profound way, you’re able to look at the complete circle of someone’s life when they die before you do. You can see the beginning, middle and end. When it’s your dad, you weren’t there for the beginning and what know about that is probably revisionist history, especially if you’re Irish.  But the middle and end – that you do know.
The end of my dad’s life is not the part I like to remember. He had Alzheimer’s disease for the last ten years he was on the earth. It took away a large part of his spirit. But he remained a very astute person most of the time. He still got upset at people who were jerks. He could still detect bullshit from a mile away. It was a paradox to be around him. He couldn’t remember how to tie his shoe, but he could read the signals a catcher and a pitcher were using in a baseball game on TV.
And he could talk about an athlete’s character. That remained especially important to him. He’d tell me stories about athletes he’d known, and those he hadn’t known but had read about or heard about. And the stories often had to do with their humility. He liked humility in a person.
At his wake, his friends talked about his own humble character. It was one of the things that made me so proud of him that night as I listened to the stories. Everyone who talked about him remembered how funny he was, and how truly humble he was.
And he knew from humility. He was an All-American baseball player, a star at Notre Dame during an era of immortals. He had two older brothers who played major league baseball. His roommate at Notre Dame won the Heisman. We all grew up hearing this, but c’mon, just think about what that must have been like. 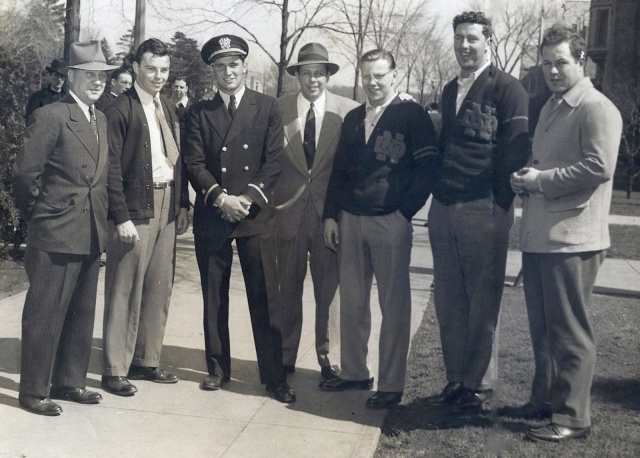 Dad at ND, second from right.
His roommate, Johnny Lujack, Heisman winner with movie star good looks, third from left.
Dad always laughed about the one letter a month he’d get compared to the bags Lujack received.
He moved to small town Iowa to manage and play on a semi-pro baseball team that he stocked with former and future major league players. His team won championships, and again he was a star. He was the kind of player the fans loved, if he was on their team. The opposing team’s fans loved to chide him, and he basked in it. As he told a reporter, it took the heat off his players, so he didn’t mind. He did a segment on the local radio station and he called it “The Dugout Dope.”
Lately, I’ve been thinking about what it must have been like for him to watch my brother Dan grow up as an athlete. All I know about that is what I saw.
He played catch with Dan and his friends for hours in the front yard. When the gaggle of neighborhood kids got too big, they moved to the backyard so they could play one on one.
I was never interested in this, I was too busy doing who knows what. I’d love to have just one of their conversations on record while they threw the ball back and forth, my dad using the catcher’s mitt from his playing days, my brother using his own glove, softened from hours and hours of him rubbing baby lotion on it as my dad taught him to do.
Then they’d get out the bat, and my dad would throw pitches to him. He’d tell him he had to hit harder, since he couldn’t run fast. This much I do remember. My mom was the only one in our family gifted with speed. She reminded us all of this every chance she got.
Over and over, my dad was asked to coach little league. Over and over, he said no. He loved the kids, but couldn’t deal with the parents, he always told us. So he did all the coaching he needed to do in our front yard, and let the chips fall where they fell.
Here’s where they fell. My brother became a catcher, like our dad was. He was ok, but he was not a superstar. He played so hard. He was a big guy, and he could catch and throw well.
As we sat at Dan’s games my dad cheered for every kid, no matter which side. After each game, whatever the outcome, we stopped for an ice cream cone and went home as if nothing new had happened. There was never a discussion about my brother’s – or anyone else’s – performance. Ever.
The same went for basketball. Dan played, and he was a strong sixth man on a pretty good team. The coaches seemed to have something against him as a starter. It drove my mom nuts. My dad just went to every game, and said nothing afterwards. Never an unkind word about a coach or a player. He told Dan he didn’t have to play if it wasn’t fun. It didn’t seem like anyone was having fun that last year, but Dan didn’t quit.
As high school went on, Dan found his niche as a golfer. He was a great golfer. His unflappable nature paid off in this sport. He regularly beat his friends. When he didn’t, he smiled. He had fun. When he beat my dad, they both smiled.
He loved golf, and didn’t want to play baseball anymore. When he didn’t go out for the team the summer of senior year, the coach was upset. This is the same coach who’d treated him dismissively in basketball.
One morning as we were eating breakfast, this coach came in our back door, into our kitchen and sat down with us at the table. He said, “Dan, I have a uniform for you. Today’s your last chance to step up and take it.”
Dan kept eating his cereal and said not a word. My dad was speechless. He looked at Dan. My mom’s face turned purple.
Dan said, “Nope, I’m gonna play golf. But thanks.” Coach got up and left, without saying goodbye.
That summer Dan had one of his best golf seasons ever. He had a blast. And I knew my dad was so proud of him for doing what made him happy.
And I know most of all he was proud of Dan’s attitude.
He’d taught him well.
Many people who’ve been through the Alzheimer’s journey will tell you a person’s true spirit remains intact throughout. Before the disease extinguished my dad’s love of reading, I’d bring him books from the library. Though he was in the early stages, I thought he could still mostly enjoy a good story. When a new biography of Jackie Robinson came out, I excitedly brought it home, and asked him a few days later how he liked it.
“Well, I started it – but it’s all just Jackie Robinson this Jackie Robinson that – as if nobody else ever played the game! I got tired of all the Jackie Robinson.”
The nerve of that Jackie Robinson.
Happy Birthday, Tom Sheehan. You were a really good man. And as a dad, you were a king.