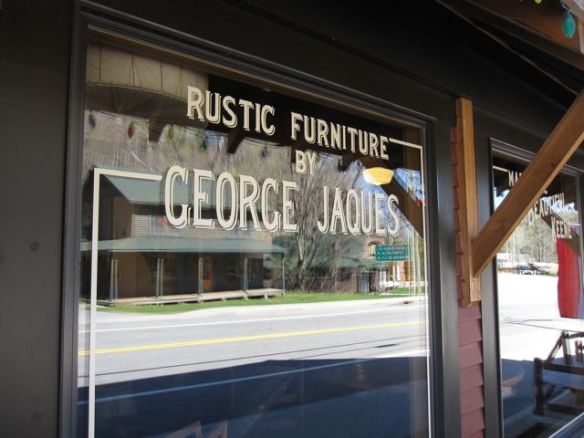 Last weekend was an unexpected girls getaway, the first one I’ve had in years. Two friends and I sped north to the Adirondacks, where a generous friend’s cabin had been offered to us.
Forget the fact that it was raining, and we were headed for Lake Placid, site of past Winter Olympics, which feasibly were held in July. We were free, that’s all that mattered. And it was my birthday.
Much laughing and talking and relaxing ensued. On Saturday morning, we headed out for a brunch-type meal. Ok, so it wasn’t morning. We found a spot called The ADK Cafe, where we were warmly welcomed and had a great meal. We asked our hosts where we should go next, and without hesitation they said, “to the furniture store” while pointing up the street.
The furniture store turned out to be Dartbrook Rustic Goods, and the owner turned out to be Jay Haws, and our afternoon turned out to be positively delightful once we met him and saw his beautiful store. My camera came out pretty quickly – sorry, the only camera I had was my phone.
Come on, I’ll show you.

ADK is of course short for Adirondacks. 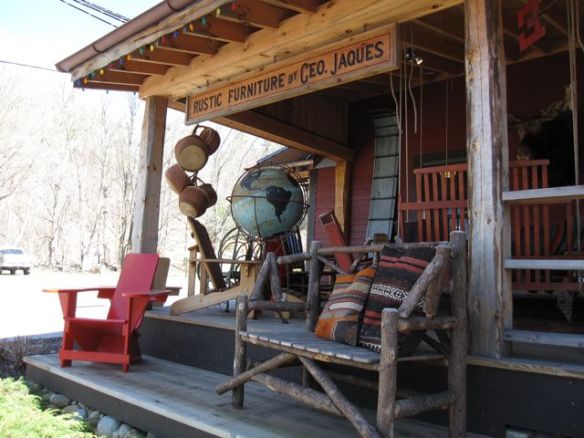 One look at the porch told me this was going to be interesting. The painted globe wasn’t too big to fit in the car, I noted.

The front porch offered this wonderful napping place, which should be mandatory equipment in every home, don’t you think?

Once inside, we started peeking around. The arrangements were so creative, colorful and unexpected. 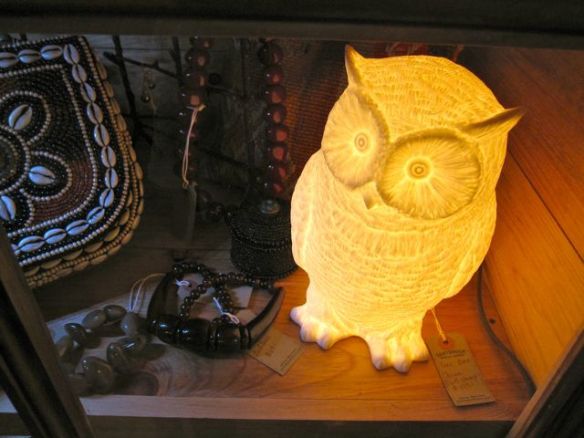 Somebody here knows what they’re doing, I thought.

Meet that somebody: Jay Haws. He’s the one on the right. We started chatting with Jay and found out he’s one of the co-owners and artists who makes the incredible furniture. This third-generation shop is right the heart of the Adirondacks, in Keene, New York.
As the website describes the store’s history:
In the 1920’s, Albert Jaques started a business building rustic cedar benches, chairs, and tables next to the Ausable River in Keene Valley. Many of his pieces still grace the porches and great rooms of the Valley’s summer residences. Albert taught his nephew Gil the trade and Gil enjoyed a highly successful career as a prominent rustic furniture builder. Gil then passed the torch to his nephew George Jaques, who worked as Gil’s apprentice after a career with the New York State Police. George ran his own store on Johns Brook in Keene Valley for over 15 years, and then became the co-founder and lead craftsman at Dartbrook Rustic Goods. During his career, George has become recognized as one of the leading rustic furniture builders in the United States, earning acknowledgement in numerous books, catalogs and national publications. 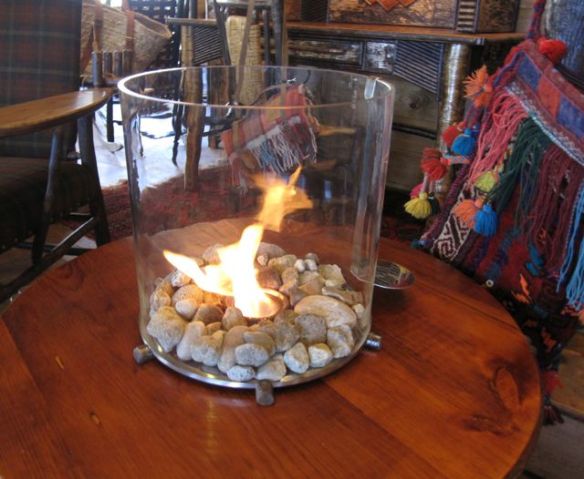 Imagine a lazy summer afternoon nap, right here…if someone else is occupying the spot on the porch. 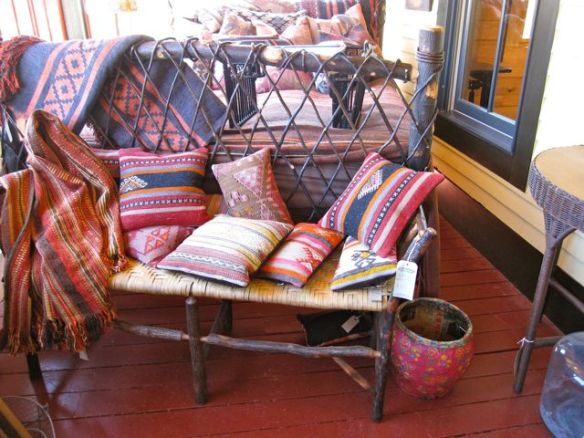 The furniture is made from yellow birch, hickory and oak, and this store contains the largest selection of this classic rustic American furniture in the Adirondack area. 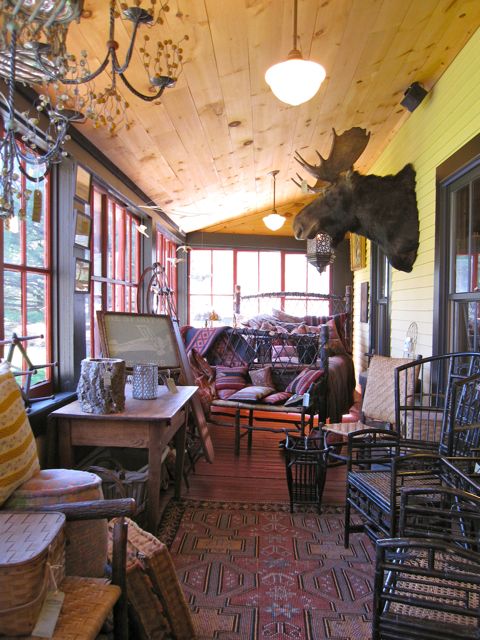 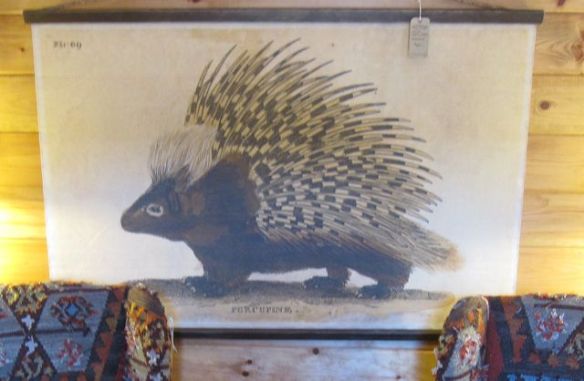 Touches like these large linen wall hangings are the accents that set Dartbrook Rustic Goods apart from other “lodgy” themed stores, and they’re the kinds of objects that make you want to go back. Yep, I’m haunted by this porcupine. Go figure.

I loved these signs describing the items. When I saw the first one, I thought it was a little wall hanging for sale; it was so charming. 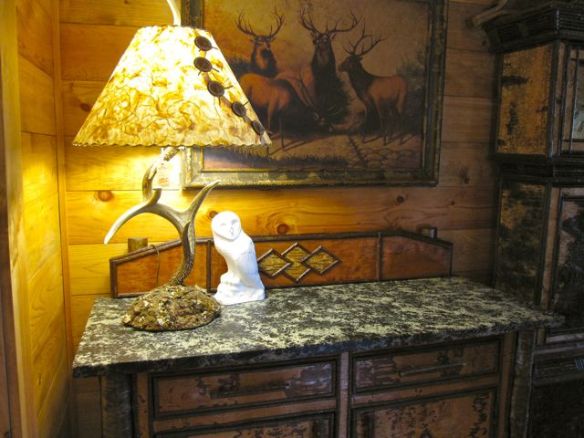 This dining room sideboard has an Adirondack garnet top, and is trimmed with reverse bark.
I could see this as a beautiful vanity too. 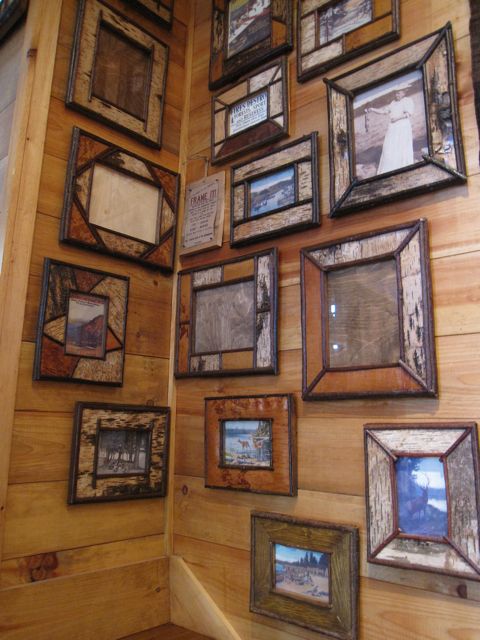 Pieces like this bookcase were truly breathtaking to come upon in the store; I can only imagine them in a home. 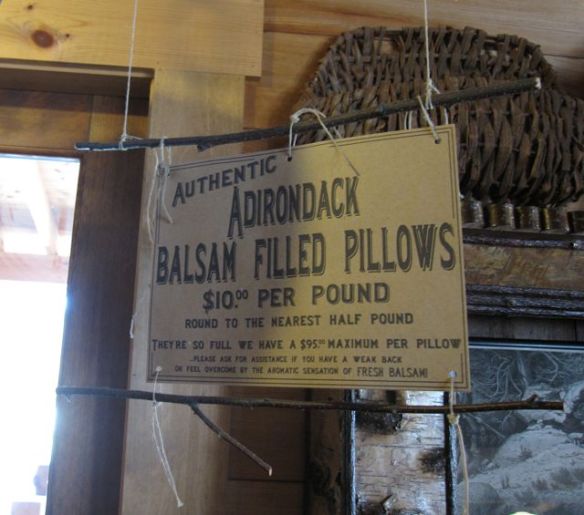 The store has a mix of classic and contemporary lighting and accents that blend perfectly with the camp furniture. 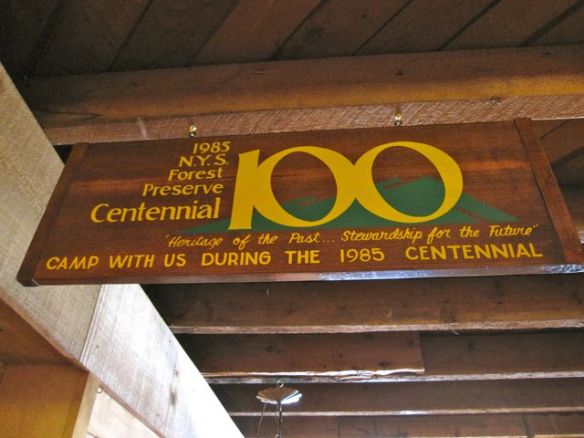 The posters and camp signs throughout are authentic.

Why not carry your Pendleton blanket on your shoulder in a leather carrier? A picnic could break out at any time. LOVE this. 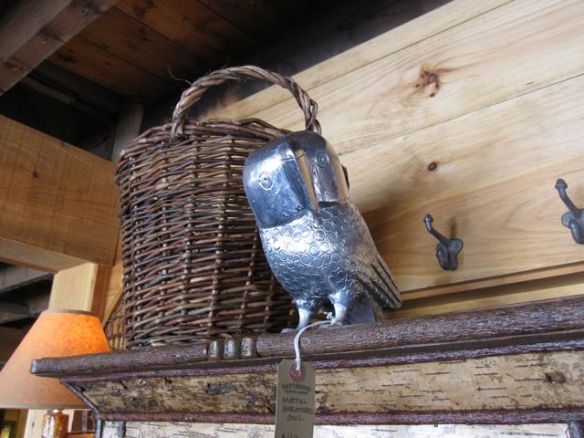 Oh, look at that. This sweet little deer dish found its way home with me.
It’s the perfect memento from such a lovely weekend.