If you have an incurable life-long addiction to design and decorating magazines and are of a certain age, the title Apartment Life is going to ring a bell. Or not.

If you’re old enough to remember it, you may not hear bells or have lightbulbs twinkling over your head so much any more.

If you did read Apartment Life, a trail of mags might have led you to it as you were passing through the stages of your addiction.

In my case, I cut my teeth on gems like Young Miss, which started as Calling All Girls, and later became just YM. It was fairly lame I thought.

Another must-read was Amercian Girl, which had nothing to do with today’s obscenely expensive line of dolls… it seriously was created by the Girl Scouts. I also read Boy’s Life, which my brother got. It was better.

At long last, I graduated to Seventeen magazine, which became my bible for a few years. Many of the style writers from Seventeen went on to long careers in publishing, and their names still pop up today. One woman, Estelle Ellis, had as much to do with shaping my mind as anyone, as it turns out. She had her finger on just about every page I turned, from the beginning.

Here’s what a magazine-iac I was. The summer I was 14, I discovered a treasure trove at my local library. They had every back issue of Seventeen magazine in their basement. You could check them out! I did. The librarian developed a certain disdain for me after so many weeks.

She never did ask me what I was doing. Back then, she must have been about the age I am now. If I was a librarian, and some little geek came in every other day and checked out a stack of old magazines, I’d have to ask her what she was up to.

I could only check out ten at a time. I still remember my elated feeling as I left the library, my totebag filled with the newest acquisitions. No summer heat for me. I was in a chair in the living room with my feet propped up, reading about movies, clothes, boys, books, and art, all curated for me by these New York types who probably didn’t care so much that a teenager in Iowa was lapping up what they deemed important to know. But I drank all their kool-aid, all the way back to issues from the 50’s featuring such ingenues as Sylvia Plath.

I swear I learned everything I ever knew from doing this. It’s why I can still kick almost anyone’s ass in Trivial Pursuit, especially when the questions are about teen fashion houses of the 60s, or one-hit movie stars of the early 70s. I still think about this stuff all the time. And thanks to the internet, I can find as many pictures of Colleen Corby and Lucy Angle as I want.

One of my favorite parts of Seventeen was the decorating section. OMG! All the stuff was from shops in New York, one called Azuma in particular. I finally made it to Azuma in 1972, but that’s another story.

Out of nowhere, when I had just moved beyond Seventeen mag–I just wasn’t that into it anymore–Apartment Life appeared! It first was a special-interest magazine in 1973, from Meredith Publications in my home state of Iowa.

Ooooh, but there was no trace of Iowa to be found in it. It was urbane, honey. It had great writers like Colman Andrews, from New West, and Drake University grad Charla Lawhon, who later moved on to InStyle.

I saved every issue of Apartment Life. Various roommates and partners chided me into getting rid of them over the years. What the hell was I thinking. I could cry.

They can hardly ever be found on ebay.

Little is even written about the mag on the internet.
But I found a copy!
Let’s just say, 1979-80….well, you had to be there. It wasn’t pretty.
It’s funny, this is not Apartment Life‘s finest hour.
And I didn’t remember it had other kinds of articles in addition to decorating stuff.
It featured celebs– People hadn’t been invented yet.
But take a gander.
I gave myself a lesson with the scanner, and here you go.
You can click on any image to see it bigger.
You do it, don’t make me do it.
This scanning thing is a time-eater. 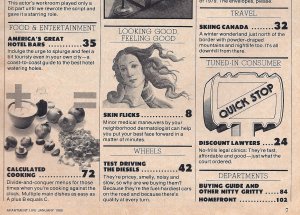 Partial table of contents–how riveting to read about discount lawyers.
But if you were busted for coke, you might need one.
Oh yes, the great diesel auto. That endured. 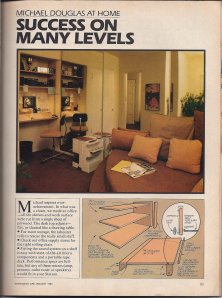 I was so disappointed to see that this issue featured Michael Douglas, one of my least favorite actors. But this is when he was all anti-Hollywood-I-smoke-pot-and-hang-out-with- Jack-and produce movies like “One Flew Over the Cuckoo’s Nest.”
And there’s no doubt in my mind that he built that luxury office all by himself, and still uses it today. Why not, with that expensive stereo equipment and all.

Donna Summer, Supertramp?
The Hustle? I can barely look at this.
Some of the wounds are still fresh.

No comments needed here at all.
Fancy though! 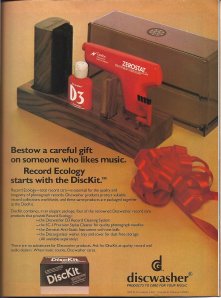 Now that’s something you don’t see every day.

Nice touch, “Record Ecology.”
Only people with dough could afford such expensive equipment.
The rest of us used our sleeves.

Seriously, my friend and I applied for this (ad by post-it).

We got an album by the Ray Conniff singers we were supposed to listen to.
We moved on and sought alternative employment.
The rest of the ads are worth reading too.
Let me know if you send away for anything. 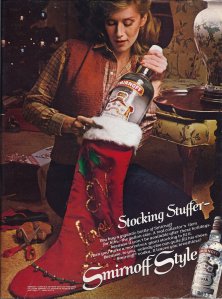 Read the copy.
It’s a very “Days of Wine and Roses” Xmas.

Oh by the way…I did save some old issues of Seventeen.
cmon…it’ll be fun!