image from Nostalgic New Orleans Collection Shop, Cafe Press
When I was maybe five, my dad taught me to say this:
“Coming to you from the beautiful Blue Room high atop the Roosevelt Hotel in downtown New Orleans.”
I had no idea what it meant, I just knew that when I’d say it he’d laugh, so I said it all the time. Later I learned it was the intro to a radio program he’d listened to at night for years, broadcast on WWL radio in New Orleans from an actual place called the Blue Room, in the actual Roosevelt Hotel.
The program featured musicians like Frank Sinatra, Louis Armstrong, Count Basie and Ray Charles. I never saw any photos of the Blue Room as he was describing it to me, and now when I do, they’re no match for the pictures he painted for me in my mind as he described what he’d heard on the radio as he sat listening in the dark.

image from therooseveltneworleans.com
He told me you could hear the tinkling of glasses between songs, and the laughter and conversations of the people in the club. Such a great storyteller was he: I can still remember him telling me if you listened very closely, you could hear the women’s skirts rustle as they danced by the microphone.
He taught me even more about letting radio take you somewhere you’d never been as we listened to Cardinal games from KMOX in St. Louis. On summer nights in the living room, with the windows open and the lights out, he told me to listen to the sounds of the game and the fans, not the announcers. To this day, I still do that when I listen to baseball on the radio.
He made sure I had my own radio as soon as it was feasible.
It happened to be feasible on my first communion day in second grade. Catholic tradition dictates that on the day you eat your first communion host, you also get a bunch of money and gifts. It’s only logical that I should have gotten a radio. I still think maybe it was the best present I’ve ever gotten.
My new transistor looked like this:

I took it everywhere with me, immediately. I can remember sitting on a swing in my neighbor’s backyard trying to figure out how to hold onto the swing and the radio at the same time.
The station the cool kids in Iowa were listening to then was KIOA, “nine four-deeee” from Des Moines. The first songs I remember hearing over and over were “A Hard Day’s Night” and “Needles and Pins.”
KIOA was fantastic. Their DJs had names like Sandy Shore and were known as “The Good Guys.”
It was sunny daytime music. It was upbeat positive energy. It was top 40 radio. And they played the Chicken Man series, probably my first introduction to satire. We kept KIOA on the loud speakers all day at the swimming pool snack bar where I spent every waking hour of childhood summers, working and hanging out.
In the late 60s I ventured down the dial on my little radio, from 940 to 1090, and found KAAY in Little Rock, Arkansas. That’s when everything changed.
KAAY 1090 was a 50,000 watt station that reached way beyond Arkansas. One night I heard something unlike anything else that had been coming out of the little Arvin.
Yep, Clyde Clifford reached all the way from Little Rock and grabbed me and shook me silly that night with his 11 pm show called Beaker Street.
Beaker Street was an FM-style program on AM radio. Back then, we called it “underground.” Clyde played stuff you wouldn’t normally hear in Iowa. And albums. ALBUMS. We’d just started buying albums instead of 45s, but nobody was playing them on the radio, not on AM anyway.
Clyde had these sound effects he’d play between songs to create a real spacey vibe while also drowning out the loud transmitter in the background. His show was trippy, full of long pauses and obscure drug references that went over my head. But I knew something was up.
Check it out.
Quite a progression from the Blue Room high atop the Roosevelt Hotel, n’est pas?
Oh, and by then I was listening on the likes of these: 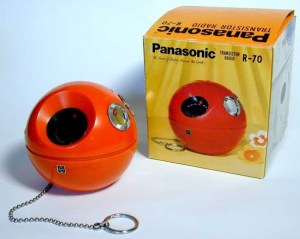 photo from really cool website gravestmor.com
Again, gifts from my dad. He worked for a company that sold electronics among other things, so I was the beneficiary of some of the latest devices.
The one above was called the Panapet, and the one below the Toot-a-Loop.
I still have both of them. All I need’s a 9-volt battery and we can roll.

photo from yankodesign.com
You could carry the Toot-a-Loop like a purse or wear it like a bracelet, or twist it and set it on your desk. I never was crazy about this one. I learned I liked my radios to look like radios. But very cutting edge, none the less.

photo from yankodesign.com
When the day came that I had to drag my own self out of bed in the mornings (high school) I graduated to clock radios. This one, in fact. We were a Panasonic household.

photo from etsy.com
I still listened to KAAY but also dialed into WABC from New York City. It faded in and out, but it was a major thrill for me at that time to know I was listening to the same stuff as kids in New York. Who needed the damn internet to be connected?
Cousin Brucie and Chuck Leonard were my late night homeboys from WABC music radio 77 AM.
Chuck Leonard. He’d say, “This is Chuck Leonard, sneakin it to ya.” I said that once at a party in college in Iowa City and got blank stares in response. That sealed it. I knew then I was a radio geek.
Chuck always sounded like he was smiling, and he’d play songs “for the girls up at Bard” and places like that…places that were a million miles away from me in Iowa, literally and figuratively, if you’ll pardon the cliche.
I learned so much from the radio then. Some nights I’d get tired of music, and prefer talk. But back then, there was very little talk radio on the air. It must have been a lot harder to convince a station owner that you had something to say back then.
I came across a guy in Salt Lake City on KSL named Herb Jepko. He had a show called “Nitecaps.” I’ve never admitted to anyone before that I listened to this. People like me who listened were called “The Nitecappers.” You could call Herb and talk about anything as long as it wasn’t controversial. Can you imagine? Somehow it must have been a relief to me in the midst of my teen age wasteland to hear old ladies talking about jello recipes in the middle of the night. I have no other explanation.
We’re getting to a post length here where I know I’ll be losing you soon. Anyone still here?
Let’s fast forward through what I listened to in college. Ima let you paint those pictures in your own head. I’m sure you can. It was the 70s. Need I say more?
I still need to tell you about some more stuff I’ve learned from AM radio. Next time.
As for now, I really miss concocting late night images in my mind of those impossibly elegant people dancing and partying the night away, way down in New Orleans.
Somebody should figure out a way to bring that back.

10 thoughts on “My Life Measured in Radios”